Difference between revisions of "System update"

From DSiBrew
Jump to navigation Jump to search 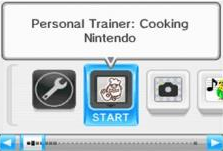 The DSi System Menu with a title inserted.

The System Menu (DSi Menu) is software shipped pre-installed on every DSi which allows the launching of games from official Nintendo certified game carts, "channels", or DSiWare titles. It runs a GUI similar to the Wii's "Wii Menu". The DSi runs in permission modes similar to the Wii, where running in backwards compatibility mode turns off extra hardware and down-clocks the CPU. Using the power button you can soft reset to return to the menu while in game (or in a DSi application), similar to the "Home Menu" on the Wii. Game carts can also be hot-swapped while in the menu.